Just like in the well known nursery rhyme, when Gracie is good she is very very good – but when Gracie is bad she is horrid. I definitely meant horrid *** I’m sure we have all been guilty of it, you know exactly what I mean. When your child has pushed you to the absolute limit and you have to mutter some form of obscenity under your breath. Well this morning was one of those mornings. Gracie didn’t want to get dressed, she didn’t want to brush her hair, she didn’t want to brush her teeth etc etc. She wasn’t the worst behaved in the world but she was definitely pushing my buttons. Thankfully, she wasn’t like this on Saturday. Saturday was a good day.

***note to self, thou shall not refer to child as arsehole.

I bought the three of us tickets to see Ovo by Cirque du Soleil at the Royal Albert hall. The show started at 15:30 so I thought we could spend some time in London first. Mummy Hew and I travel into London regularly for work but don’t often spend time in town as tourists, so we grabbed the opportunity to take Dolly and the camera out for the day. Due to the Beast from the East, which seams a distant memory now,  Dolly’s Theatre Train class was cancelled so we set off earlier than we originally planned. I drove to Stanmore so we could pick up the Jubilee line, rather than getting the overground and changing. It makes life so much easier with Gracie being able to get straight on the tube. She also likes the fact that the train starts overground and then goes underground. *top tip right there….you’re  welcome* 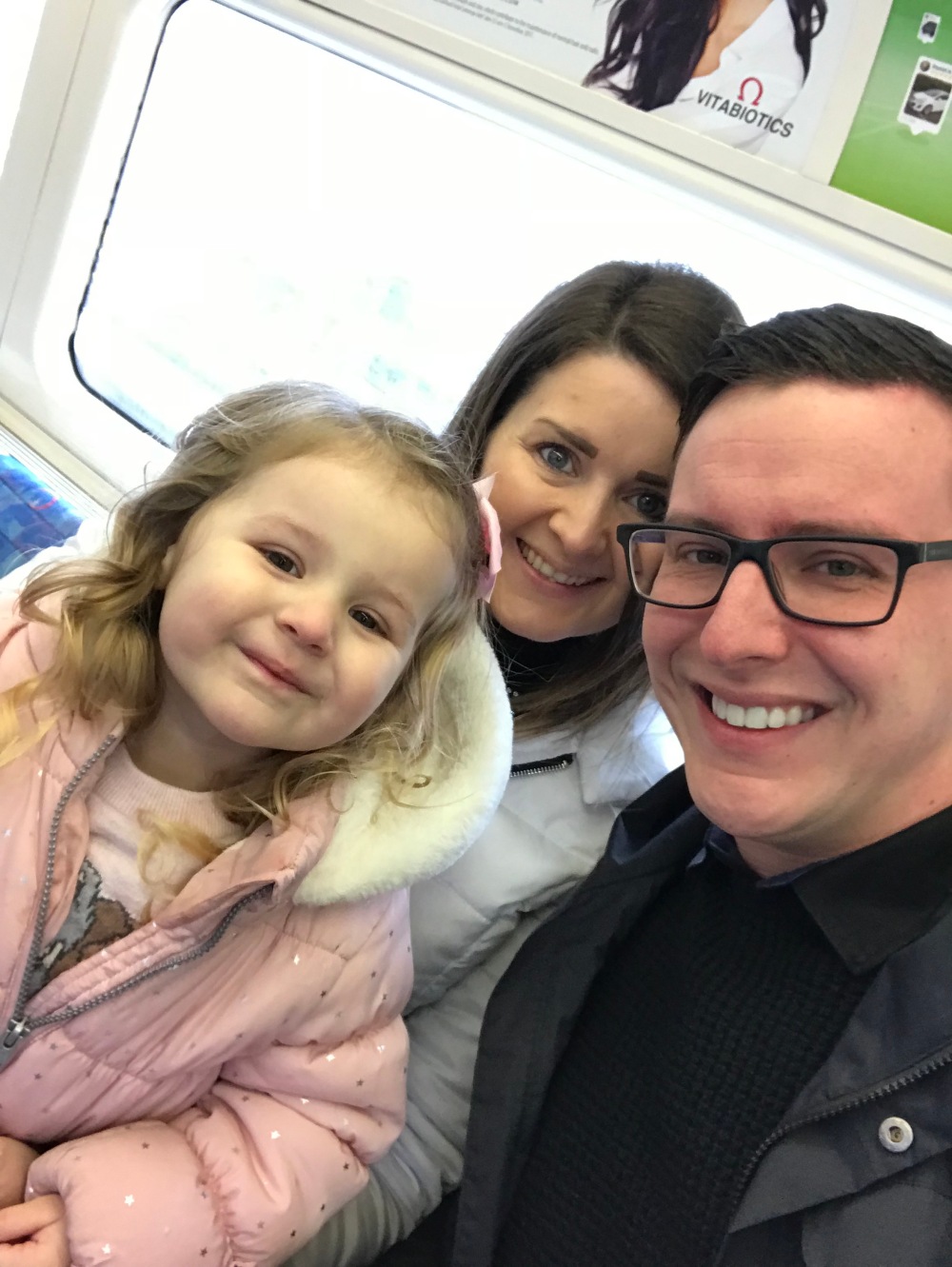 I decided that we would go to the Natural History Museum. I haven’t been since I was about 4 and Mummy Hew hasn’t been at all. I was particularly excited because they have a new Whale in the entrance hall. Dippy the dinosaur – he’s the T-rex that used to hang in the entrance hall – was moved in 2015. He hung there since 1979 but it was felt that his time had come to move on. He was replaced with a skeleton of a blue whale. I’m not sure what he is called but I was really excited to see him.

If you do go to the NHM I would highly recommend using the side entrance  we arrived about 11:00 and there was no queue at all. The main entrance was looking pretty busy. It does mean when you arrive you don’t arrive in the entrance hall, but you can easily make you way there later – thats what we did. *top tip two* 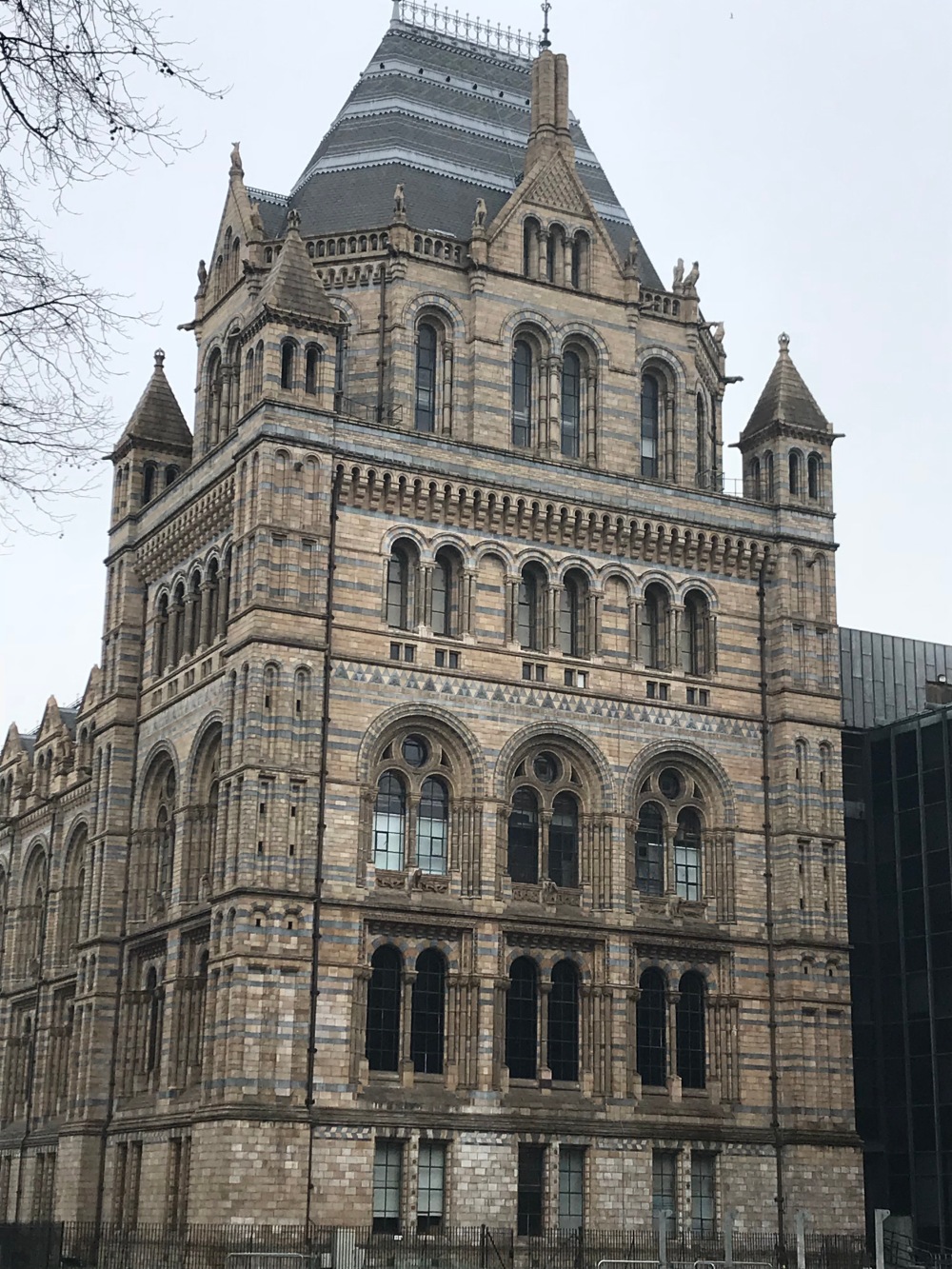 In all honesty, Gracie was more excited about the pink donut she saw at the bakery at the tube statin that she was at walking round the museum. She was probably a little bit too young to appreciate the dinosaur skeletons, the stuffed penguin, the Dodo, ostrich, polo bear, eagle etc etc. She did have a good look and made a few oohs and arrrrghhs. I think she though she was at a really boring zoo.  When we saw the grizzly bear Gracie thought it was the Gruffalo, and she did her best Roarrrr, which was pretty cute. She certainly drew an appropriate enough amount of attention to herself and then continued her Roarrr to the passers by. 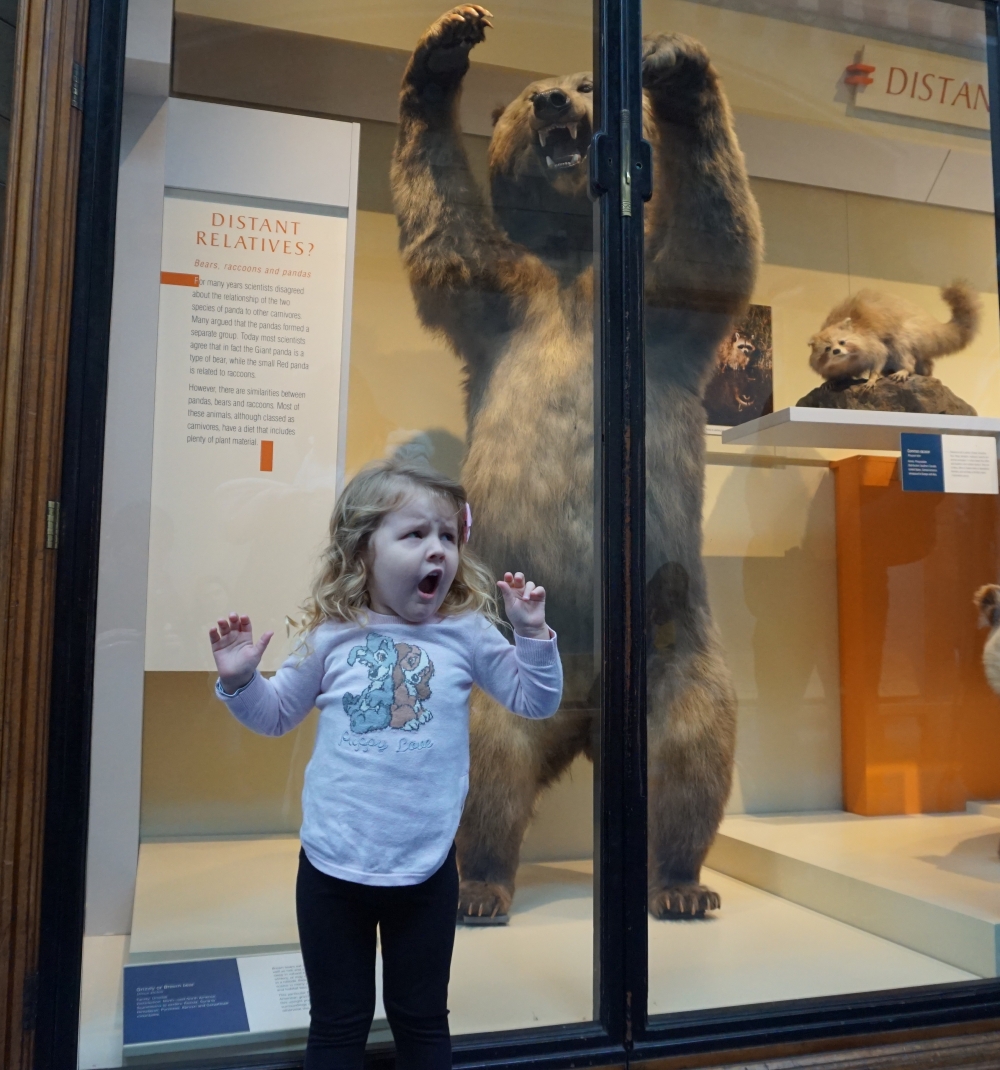 We explored the ‘humans through the ages’ section. I will give you the warning the we didn’t get. It contains a figure of a caveman, who is stood, bold as brass with his wang out. Don’t get me wrong, Mummy Hew and I appropriately giggled like a pair of school kids and then, as an afterthought, thought do not let the child see…..too late! ‘Daddy why’s that man got no pants on….Daaaaaaaady look he hasn’t got any pants’ we shuffled her along explaining that a long long time ago people didn’t wear clothes. We walked round the corner and Gracie then saw the mans bottom. but she was mortified. ‘Daddy, Daaaady I want to see the mans tail again….Daddy were is the mans tail gone….Oh Daddy I can’t see his tail’ I was speechless. Don’t get me wrong, I didn’t stop her, its was hilarious!

I said to Mummy Hew that I wanted to go to the main entrance and see the Whale. She just laughed….thought I was joking. She said that we had already been and I had taken photographs of the Whale. I protested that I hadn’t and we should make our way to the entrance hall. So we did. and there it was….a Whale skeleton….except I though it was a flying dinosaur. I was so deflated. It looks nothing like a Whale. Mummy Hew found this extremely funny…I felt like the fat kid who dropped his cake (this was also me, age 7). I literally couldn’t believe my eyes. I had been wanting to see this fucking Whale for the last 18 months and there it was, right in front of my face, looking nothing like a Whale. 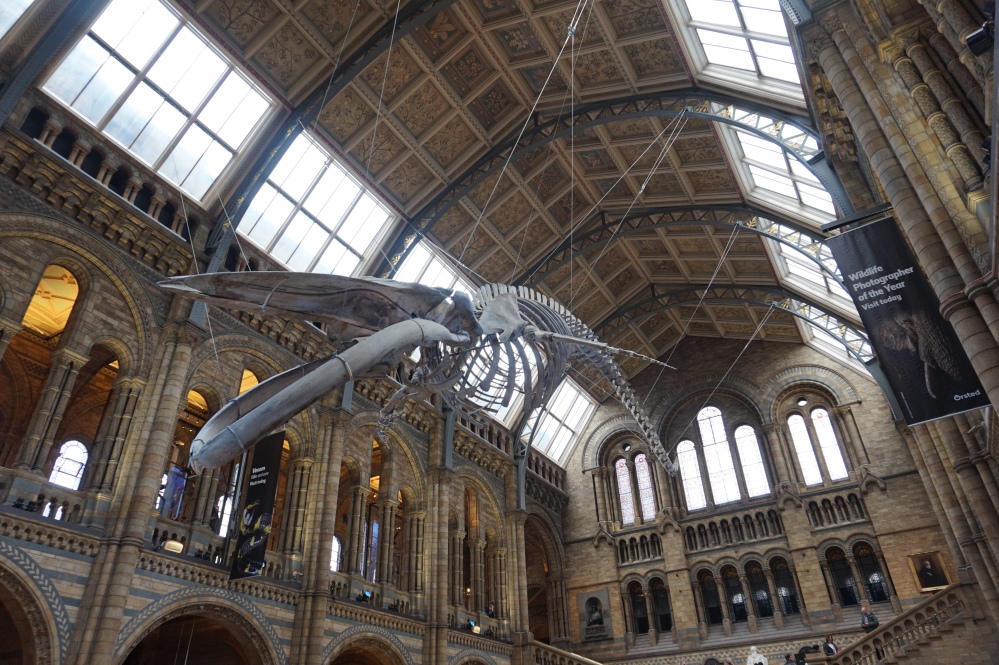 I was fed up with the NHM, we had a good time but the Whale ruined it for me. I was also getting hungry. We ate in the T-rex Grill, inside the NHM. Is was reasonably priced, the service was good and it was quick. There was a good selection on the menu. There was a HUGE crudités selection, 10 quid for the biggest bowl you have ever seen in your life, with humous, pita, some other dip….any good parent continuous of their child’s diet should consider ordering this – I didn’t, we had pizza and chips, but the table next to me did – well done them.

Our tickets told us that the doors opened at 14:45 so we walked across the road to the Royal Albert Hall. Mummy Hew had her google maps open and took the lead…..in the wrong direction. She always does this, I have no idea why I listen to her directions. But I definitely didn’t get cross…..No, I actually didn’t. I’m never normally anxious when in London but I had a sudden feeling that I needed to be aware of my surroundings. We were crossing the round outside the NHM and I remembered  the chap that got run over a few months back. There were metal bollards at the crossing, I asked Mummy Hew to stand behind them and just said we can’t be too safe. It’s shame really that we have to think like this but I’d rather be a bit extra cautious. I don’t want Gracie growing up being scared to explore the beautiful city that London is, but I want her to take time to recognise the risks around her…..I’m not sure I’m ready to think of her galavanting around the city on her own, I mean she’s only three!

When we got to the Royal Albert hall we found our seats….in the clouds. I have to be honest and say I was a little bit gutted. I thought I picked our seats really carefully….and for once I didn’t just pick the cheapest option. But once the show started it really didn’t matter. It was an amazing show! The first half was a colour packed adventure, Gracie loved it. There were acrobats, dancing, colours, lights….I was blown away. There was a love story type theme ongoing thoughout the performance, it felt a little bit like Upsey Daisey had got lost in Alice in Wonderland. 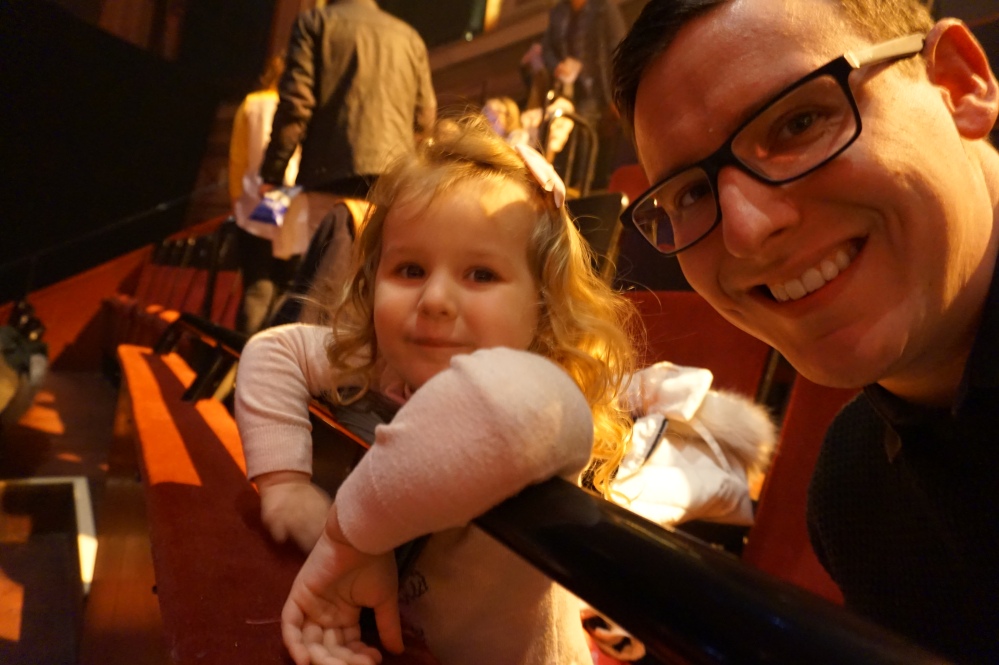 During the interval Gracie was getting a bit restless. She asked if the show had finished and if we could go home. The show was nearly 2 and a half hours so I can understand why she was getting a bit pissed off. In the second half of the show there was some more acrobatics  (Gracie was pretending to be asleep with her new teddy at this point) as well as a trampoline type show….OMG it was wicked, I was glued to it. Gracie perked up at this stage to and asked if she could have a go. I couldn’t take my eyes off of it! 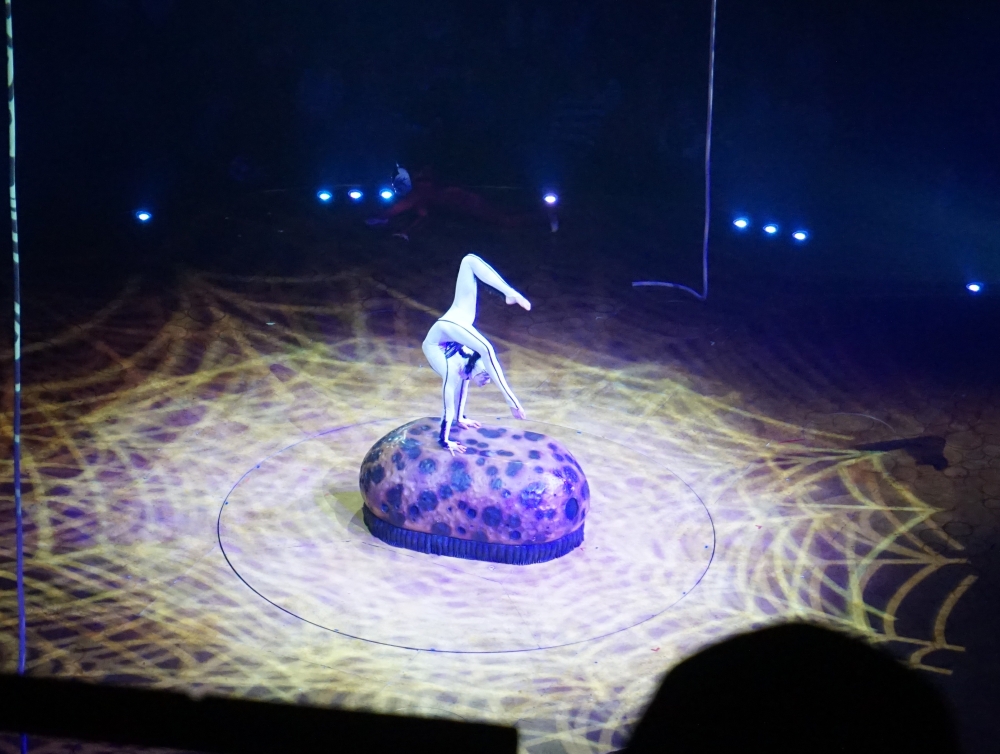 On the tube home Gracie had a additional burst of energy. She was singing at the top of her voice, insisting on standing and holding the hand rail. She was like a three year old drunk on her way home….maybe I can see her galavanting around the city after all.

All in all we had a really good family day out. I was a bit nervous before we went that Gracie would get bored and play up…but she didn’t and I couldn’t have asked for her to be better behaved. I fear I might sound like that prick with the perfectly behaved child….but on this day I was.

View all posts by daddyhew